With Pride: Coke Staff Wave the Flag for Diversity and Inclusion 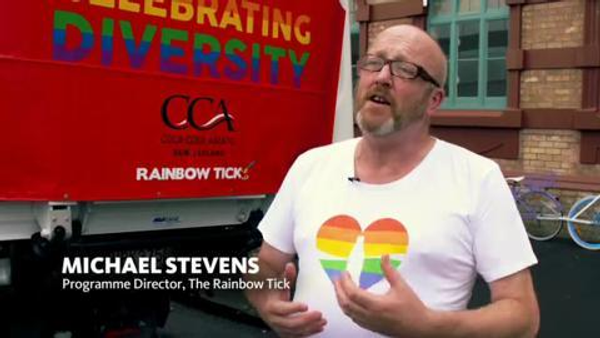 has a standing history of supporting inclusion and diversity. We have long been a strong supporter of the LGBT community and have advocated for inclusion, equality and diversity  through both our policies and practices.

In 1955, Mary Alexander became the first African American woman to appear in a print ad, a new era for advertising and something almost unheard of at the time.   Recently, we’ve shared personal stories from Coke employees about their experiences coming out, surprised Sydney locals and tourists by updating the iconic Kings Cross sign with the colours of the Rainbow community and bringing our brands to life at the 2014 Gay Games in Cleveland, Ohio.

Just like our global counterparts, New Zealand is no exception when it comes to creating and supporting a diverse and inclusive workplace.

If you were at this year’s Auckland Pride Parade you would have noticed (amongst thousands of supporters, vibrant costumes and booming music) over sixty Coke NZ staff, families and friends parading down Auckland’s vibrant Ponsonby Road with a three piece band, hoola-hoops and retro bikes in tow.

For the first time, Coke NZ chose to participate in the parade to show their ongoing commitment to diversity and inclusion in the workplace. As well as a sign of support to the local LGBTI community, it was ultimately a celebration of embracing differences, coming together and having fun.

Heidi Somerville, Marketing Manager and ‘parader’, said “to be here tonight celebrating that [diversity] is really just a great thing” with Design Studio Manager, Ryz De La Vega, adding “we stick together, I love it!”

Martin King, General Manager Human Resources at CCANZ was also “really proud” to be at the parade, saying “I feel really proud to be here, making a difference with diversity”.

The parade came only one day after CCANZ was awarded with their official Rainbow Tick certification, following their accreditation last September. Received through an in-depth audit process, the accreditation is a “confidence mark” recognising businesses as being expressly inclusive of the LGBTI community. CCANZ was the first FMCG organisation in New Zealand to receive the tick.

Another Sip
CLICK THE TILES TO EXPLORE MORE ON JOURNEY
Re-Cap: Must Read Stories
The Fizz
RECOMMENDED FOR YOU
Water Only In Primary and Intermediate Schools

RECOMMENDED FOR YOU:
The drinks are on this summer